Crews from the Williamson County Fire Rescue couldn't save a burning vehicle on Interstate 840 in Tennessee last week, but they were able to salvage a charred ring box hidden under a seat that contained a very special piece of jewelry. 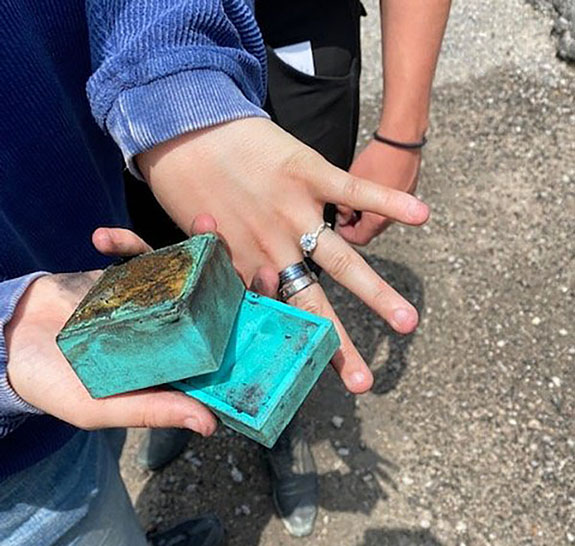 The fact that the diamond engagement ring was the only item to survive the blaze seemed like "a sign" to Myers Hart, so he wasted no time proposing to Brooklyn Stevens on the roadside with the rescue crew documenting the event with still photos and a video.

A shocked Stevens reported that the ring was still warm from the fire when Hart slipped it on her finger.

Early last week, the high school sweethearts and Stevens' best friend had been driving a rental car just south of Nashville on Interstate 840 when they heard a loud bang. They quickly pulled over to the side of the road and realized the car was on fire.

When the Williamson County Fire Rescue crews arrived only a few minutes later, the car was already 80% consumed by flames.

Hart and the friend knew the ring was hidden in the car, but they could only watch helplessly as the fire squad worked to douse the flames.

When it was finally safe to approach the vehicle, the friend whispered to the firefighters that a ring box was hidden under one of the seats.

“We started sifting through all the ashes and everything and it was melted against the seat," Fire Engineer Steve Hopkins told NBC affiliate WSMV-TV, "and actually it was perfectly encased in the ring box. I opened it up and [the ring] looked brand new, so it was really a miracle.”

Hart had purchased the engagement ring two weeks earlier and was planning a proposal. But, now, with a charred ring box in hand, Hart went down on one knee and asked Stevens to marry him.

At first, Stevens wasn't sure how to respond, as the car smoldered nearby.

Here's how Stevens described the scene for WSMV-TV: “He gets on one knee and I’m like, ‘Here?’ and I started crying. I said, ‘Here? Right now? Like the car just caught on fire. Are you serious? I mean, yes! Yes, of course I want to. But, like the car. And he was like, 'I know.'”

Stevens said, "Yes," the two embraced and Hart placed the still-toasty engagement ring on her finger.

The Williamson County Fire Rescue posted photos of the scorched car and scenes from the unusual proposal on its official Facebook page. The agency wished the future bride and groom many years of happiness and thanked Fire Engineers Terry Burress and Hopkins, as well as Firefighter Mitchell Greenham for making the couple's Monday afternoon a little more special.